Skip to content
Barak Berkowitz at Bind 4.0: “I would now found a virtual assistant company” 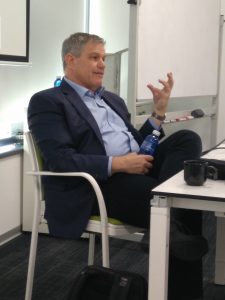 Mentor Barak Berkowitz, COO of MIT Media Lab, recently gave a master class to all entrepreneurs at Bind 4.0. He focused on Artificial Intelligence, an industry which is exploding right now because of some recent technology breakthroughs. There’s already been a success story with Amazon with its Alexa powered Echo, which is built with technology from Evi, a startup founded by Berkowitz. He even said he would found a virtual assistant company if he were to entreprendre at this moment.

These are his most interesting remarks:
– If you are raising money, timing is fundamental.

– If you are starting a company, focus on a field in which there is not much competition. In this respect, blogging platform Six Apart was not his best project.

– In the Artificial Intelligence field, machine learning has become fundamental. Not believing in it was the main mistake of Wolfram Alpha, were he was CEO for a short while. It’s important to underline that deep learning speeds up the possibilities of artificial intelligence by automating tasks where describing the precise rules is much harder.

– Facebook’s 1.85 billion users and the world’s 6.1 billion cellphones are a huge opportunity for anybody right now. Berkowitz remembered that at his time at Apple 100 million PCs was considered full penetration and that selling 100 million mouses at Logitech caused a big party.

– Human capabilities are expected for computers between 2020 and 2045. “Alexa was basically impossible 10 years ago”, he explained. Nowadays, machines are already better than humans at visual recognition!

– There is a lot of money being invested nowadays in artificial intelligence startups. As of industries in which artificial intelligence can be used, he talked about home services, health, online marketing, fintech or shopping, besides Industry 4.0. Berkowitz is especially interested in the combination of AI and robotics. “The new scarce resources will be data and people”, he added.

– In the “but” part, he explained that every big company is already investing in AI. “There is a lot of competition. Everything Google is doing is in this field and they have more data and talent than anybody else”, he explained. So what are the options for startups? He pointed out that open sourcing technology (what Tensor Flow is doing) and focusing on tools that solve specific problems (Industry 4.0, in fact) are the best ways. “You need to lock-in users and owning their data is the best way”, he added. This is what Sense 360 is doing by providing a free service.

– Technology is not critical. Having the right people and social engineering are the most important. In this respect, he recommended providing customers with security, data privacy and easy interfaces.

– If he were launching a startup right now, he would create another virtual assistant. “Siri and its competitors do not really use deep learning and at the end everybody is going to use this agents”, he
explained.